Have you ever seen a large group of ravens flying together and wondered what they were called? It turns out there’s a name for that! A group of ravens is officially referred to as an “unkindness” or “conspiracy.”

Where Does the Origin Name Come From?

While the terms “unkindness” and “conspiracy” may have negative connotations, it’s fascinating how these words came to be associated with groups of ravens. According to one theory, the term “unkindness” is derived from the phrase “one for sorrow, two for mirth,” which refers to the superstition that seeing a single raven foretells bad news while seeing two ravens means good tidings are on the way.

As for the term “conspiracy,” this likely has its roots in medieval times. Due to their dark plumage and eerie calls, Ravens were often associated with witches and other dark forces. Consequently, it was believed that groups of ravens gathering together were plotting mischievous deeds!

When do Ravens Form Groups?

Ravens typically form groups, an unkindness, during mating season, feeding on dead animals, or perched on a big tree.

Being a scavenger species, ravens frequently eat dead animals. However, once they have finished their present meal—if there are enough leftovers, any one bird can pick clean—they will all split off in search of other food sources.

Sometimes they will all be perched on a big tree like in the first photo of this post.

So next time you see a big group of ravens flying overhead, you can impress your friends by telling them that it’s an “unkindness” or a “conspiracy.” Don’t be too surprised if they give you a weird look in return! 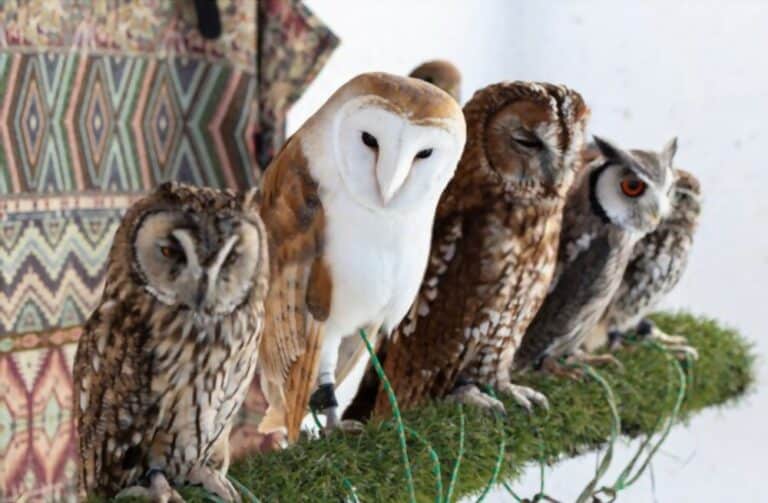 Owls are fascinating creatures. These nocturnal birds of prey have been the subject of myth and legend for centuries. Today, there are more than 200 different species of owls in the world. If you’re lucky enough to see one in the wild, you might wonder what a group of owls is called. Most animals have…